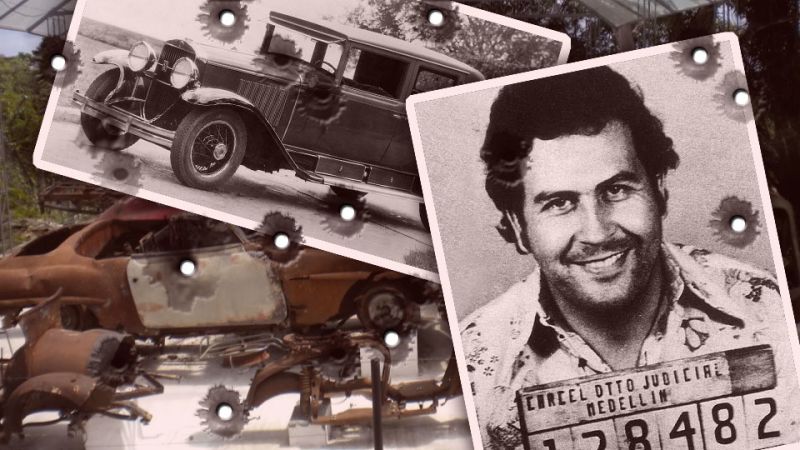 Without fail, the first two things everyone asks when you go to Colombia is about blow and Pablo Escobar. Blow and Pablo are twin evils that make up a good portion of Colombia’s modern history. The legacy of this less-than-dynamic duo is particularly felt in the beautiful city of Medellin, which was home to the brutal drug cartel lead by the man himself. In an interestingly macabre flip of the script, Medellin has taken the man who terrorized the city is a significant source of tourist interest, and thus Medellin has created an industry cocaine themed city tours.

Prior to my going to Colombia I had read about this dark tourist phenomena and my attention was definitely caught. I contacted the good people at Medellin City Tours and they were cool enough to set me up with tour guide Carlos Palau to walk me through the seedier side of Medellin.

To put it mildly, Escobar was the King of Medellin. At his height of power he was bringing in about six million dollars a day in drug money. Take that in for a second – SIX MILLION GOD DAMN DOLLARS A DAY. He used that money to build homes, schools, churches, hospitals, oh, and kill cops. Like five to ten police officers a day. It is estimated that by the time he died in 1993 he had paid for the murder of at least 635 police officers. Carlos, my guide, was a member of the Medellin police force during this time and his stories were chilling, the enemy was everywhere and going to work was a death sentence.

The first stop on our Tour de Blow was to the infamous Monaco Building which was the home of the Escobar family. From the outside, the Monaco Building appears to be a crumbling bunker with a single police officer guarding the entrance. Now, access to this building is forbidden but thanks to some fancy talking, we were able to get into the compound. In addition to being the home of the Escobar’s, it was also the location of the drug lord’s crazy-ass basement torture chamber, and let me tell you, it is creepy as shit.

Tiny rooms with tile floors and heavy doors, a large Jacuzzi-sized tub for dealing with the remains of said offenders, and sturdy gated entryways. It is silent, cold, and pure nightmare food. It was here that the kingpin would do his deeds, wash his hands, and take the elevator upstairs to the sprawling airy building to join his wife, mother, and children.

The rooms are now a wreck- blinds twist in open windows, glass glitters evilly on the floor, and large holes are ripped in the ceiling from where money was hidden. At the risk of sounding hippy dippy, there is an immense weight to that building- it raises the hair on your arms and makes you look over your shoulders.

Thoroughly creeped out, we hopped in the car and zipped Cemetario Jardins Montesacro, the home of Escobar’s corporal remains. The gravesite is tended by an elderly man who Carlos explained was given a home by Pablo and is now paid by the Escobar family to stand watch over their headstones. What is interesting to note is that the tourists make up one part of the visitors to the grave. The other portion is drug lords from other Latin American countries who go to pay their respects to the big boss. How can you tell? The flower arrangements on the grave bear flags from the home countries of visiting drug lords.

I stood on his grave eating a popsicle and puzzled at the powerful draw that he still had, after all, monsters have always appealed to our darker nature… I asked Carlos how he felt about these tours and if he saw them as further glorification such a violent character. He responded by saying that he personally felt that they were important, that people needed to be aware what dangerous power is possible, and that for him personally, the tours provided a way for him to talk about his experiences without having to burden his family with such heavy memories. We stood next to each other and watched the tiny flags adorning the drug lord bouquets flutter in the breeze.

At the end of the tour, Carlos dropped me off in the El Poblado neighborhood, my mind was swimming. But I had one last question: are the Escobar’s out of the cocaine game? Carlos threw his head back and laughed, and that was answer enough for me.